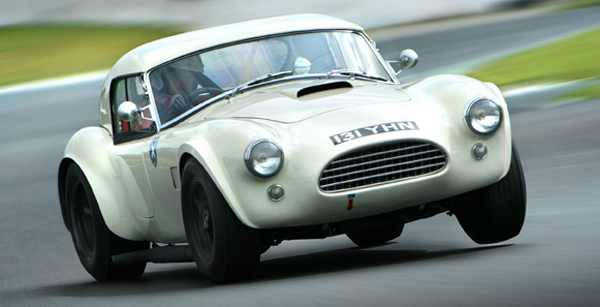 COB 6008 was one of only three right-hand drive Independant Competition Cobras (as defined by the Shelby American Automobile Club) with flared rear wheel arches to allow for wider race tyres and cut-back ‘FIA’ doors where the trailing edge of the door followed the curve of the wheel arch. The bodywork was made from thinner gauge aluminium and they used the new Halibrand alloy wheels. Uniquely, Bruce Ropner requested that his Cobra should replicate the ‘single-seat’ cockpit of the D-type, with a windscreen that could be easily replaced by a small aeroscreen and the passenger area enclosed under an aluminium ‘tonneau’.

The details regarding the order are lost in the mists of time and the AC records did not include the unique modifications to the car. However, Bruce clearly remembers the day he collected it from the Thames Ditton factory, its narrow wire wheels looking lost inside the wide wheel arches, and the 230-mile drive home. The Cobra, registered TWU 2, was sent to the ex-Ecurie Ecosse mechanic, Wilkie Wilkinson, who was working for BRM in Bourne. He added wider BRM alloy wheels, installed Weber carburettors and larger brakes. Wilkie, who maintained Sir John Ropner’s D-type and semi-lightweight E-type, also hand cut two rows of louvres along the length of the bonnet to aid cooling. Bruce collected the car from Bourne on a cold winter’s day; the alloy wheels were shod with R5 race-pattern tyres that proved totally inadequate when he encountered a stretch of sheet ice. The spinning Cobra was observed by an approaching police car, whose occupant fortunately proved sympathetic to the situation. Bruce’s offer to swap cars was politely refused.

One of the first race meetings at Croft was the Daily Mirror Trophy. Celebrity driver Jacks Sears was entered, driving his usual Willment Team Cobra, but when the car was started, it was found to have a broken rocker and damaged pushrod. However, Jack’s mechanic, Mike Brown, cannibalised the required parts from the Mustang of BRSCC secretary Nick Syrett. The work meant that Sears could not take part in practice so Ropner offered his Cobra to allow Sears to qualify, despite such a move contravening the rules. The stewards could not be deceived since the cars were a different colour, as the Clerk of the Course confirmed, but when subjected to Ropner’s persuasive techniques, he decided he ‘was colour blind’. Sears practiced in 6008, and went on to win the race in his Willment Cobra.

Bruce Ropner raced the Cobra extensively during 1964, sharing the car with Keith Schellenberg, and won the first drag race held in the UK. Paired against the American driver Dante Deuce in a Shelby American works team Cobra, Deuce was faster off the line but a missed gear change saw Ropner catch and pass him before the finish. This led to Ropner taking greater interest in drag racing and he sold his Cobra to Keith Schellenberg. On November 28th 1965, the car was entered in the VIII Grande Premio de Angola, a major International sports car race held around the streets of the African port of Luanda in the Portuguese colony of Angola. Entered against opposition such as the Ferrari of David Piper and the 7-litre Ford France Cobra of Jo Schlesser, Schellenberg brought his new car home in a respectable 12th place behind a plethora of Ferraris and Porsches after a gruelling race. With Schellenberg favouring automobiles such as vintage Bentleys, the following year he put the Cobra up for sale via a local garage in Yorkshire where it was offered for sale during December 1966 at a price of £1,750. Now registered 131 YHN, it sat amongst the dealer’s stock before being put into storage for several years, finally changing hands in 1984 when car dealer Brian Classic acquired it. Shortly afterwards it passed to Michael Fisher who carried out some restoration work and painted it Viking Blue, adding a driver’s roll-over bar and quick-lift jacks. It passed to Gary Hamilton and in 1996 was advertised for sale through Paradise Garage in London. Peter Hannen owned it for several years before selling it to Morgan dealer Bill Wykeham who entered it in historic races. In 2000 it was purchased by James Lindsay who continued to race the car before being persuaded to sell it by the current owner, Kevin Kivlochan, in 2003. No sooner had he purchased the Cobra than he raced it at the Macau Grand Prix.

Kevin and 6008 competed in prestigious events at circuits such as Goodwood, Silverstone and Le Mans where notable drivers such as Jack Sears, Jackie Oliver, Dan Gurney, Gerry Marshall, Derek Bell, Sir John Whitmore, Stefan Johansson and Richard Attwood shared driving duties. He also entered smaller club events such as the annual AC Owners Club Goodwood Sprint, where in 2005, 2007 and 2011 Kevin Kivlochan recorded the fastest lap of the day. The car was featured in numerous magazine articles including Octane and Classic & Sportscar. Eventually the ravages of time began to show and in 2009 it was decided to carry out a full restoration, retaining as much of the original car as possible, including the chassis and body panels. Thus the long, arduous process began and it was decided to repaint the Cobra to the same specification as the day that Jack Sears drove it at Croft in 1964. As soon as the restoration was complete, it took part in the 2011 Le Mans Legends race and a few weeks later was displayed at the prestigious Salon Privé event in London.