The history of each of the 453 ‘289’ Shelby-AC Cobras built by AC Cars during 1963 and 1964 has been thoroughly researched by the Shelby American Automobile Club and the results are published in its authoritative World Registry. Few examples have such detailed records as COB 6008, whose first owner can provide information dating back to the day he collected it from the factory. His new sports car proved effective on both road and track, back in the days when it was normal to drive to the race and home afterwards. To underline the performance potential of the AC Cobra, Bruce recalls the time he left London at 3.15 a.m. one summer morning and set his stopwatch as he left Hyde Park Corner, heading to the A1 for the 220 mile drive north. His elapsed time for the journey was 2 hours 18 minutes, in a time when the whole length of the A1 was single carriageway.
Reports of some of the Cobras first competitive events can be discovered in the automotive press of the time. On 6th September 1964, Bruce Ropner entered the Capston 4-Hour relay race at Croft and on 29th September it competed in a drag race at RAF Church Fenton where it won its class. Ropner often shared the car with Keith Schellenberg who during 1965, purchased 6008 and continued to compete at Croft during that season with some success. He then shipped the car to Africa to take part in the Angolan Grand Prix in November 1965.

During 1966, Schellenberg put the Cobra up for sale for £1,750 via a local dealer, Scorton Garage. At the time, there was little interest in used race cars so the car went into storage before being purchased by Brian Classic, who traded it to Michael Fisher. He carried out some restoration work and resprayed it in the Shelby team colour, Viking Blue. A rather dubious roll-over bar was replaced by a proper braced hoop and quick-lift jacks gave it a more authentic race-car appearance. Fisher arranged a test session at Silverstone and considered it rather dangerous, but the challenge of sorting the car was accepted by a new owner, Gary Hamilton, who kept the Cobra until 1996 when it was sold to Peter Hannen. 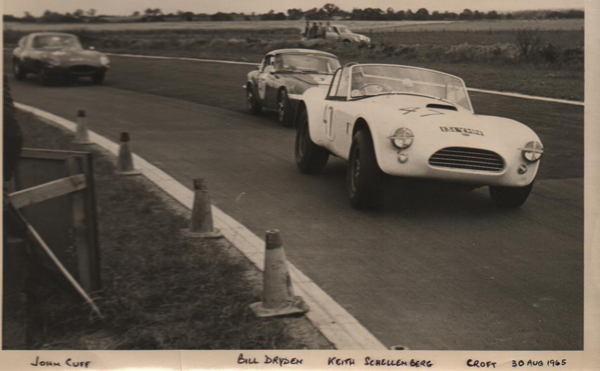