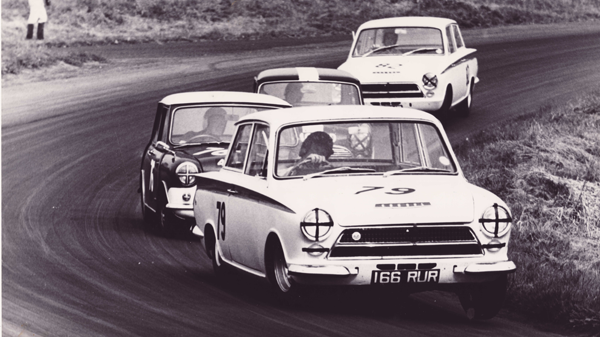 166 RUR, chassis number 17, is believed by Lotus experts to be the second oldest surviving MK1 Lotus Cortina in the world.  It is the very first ‘works’ car to be raced, at The Oulton Park Gold Cup on 20th September 1963. The Lotus-Cortina was the modish must-have in the 60’s as adept on the circuits as it was at installing status on the high street.  The brainchild of Ford’s Walter Hayes, originally plans called for 1000 units to be homologated as Production Touring cars for the International Sporting Code’s Group 2 category.

Lotus boss Colin Chapman had been keen to produce and in-house engine, the Coventry-Climax item used in the Elite proving overly expensive. With a timely injection of funds behind him, ‘Chunky’ turned to Autocar’s technical editor Harry Mundy to conceive a twin-cam head for the bombproof Ford Kent bottom end, the 1498cc four making its debut in the back of a Lotus 23 sports.  After further revisions by Cosworth’s Keith Duckworth, with capacity upped to 1558cc, this soon to be a classic ‘twink’ was inserted into the Cortina hull, along with reworked suspension and light alloy skins for the doors, bonnet and bootlid. Production of the Lotus-Cortina or Cortina-Lotus as The Blue Oval referred to it – commenced in February ’63 but it would be September of that year before the car was eligible to race. Approximately 12 works cars were constructed.

The works usually had 2 cars at the meetings. 166 RUR is recorded in Bob Dance’s factory records of the time, showing it’s initial outing at Oulton Park. followed a week later at Snetterton raced by Jim Clark.  The car then went to the USA for 1964 as part of “The English Ford Line” team.  Dan Gurney was the next to pedal the car.  The Californian remembers the ’64 Sebring 250 with fondness: ‘Jimmy and I had a great time racing each other in the Lotus-Cortinas.  Dan finished 16th on the bumpy airfield circuit.  The US adventure for 166 RUR continued with a class win for Sir John Whitmore at Pensacola, a sixth place for Peter Arundell at Riverside and a placing for Whitmore again at Leguna Seca. Later that year David Hobbs had a hub-breaking run with American Dave Clark to an eventual ninth in the Virginian Marlboro 12 hours, after which the car was sold to Harley Cunningham of Charlotte.

Click here for details on 166 RUR today including appearances at Cholmondely and the 2011 Goodwood Revival.